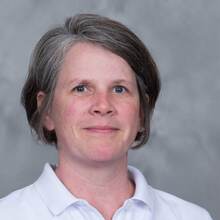 Dr. Molly Duesterhaus just finished her 6th season as Millikin's Director of Swimming. In addition, Duesterhaus serves as the head coach of Millikin's women's triathlon program since its addition to Millikin Athletics in 2018. Since her arrival in 2016, Duesterhaus has turned the swim program into a championship level program that continues to gain momentum in the region and College Conference of Illinois and Wisconsin (CCIW). Under Duesterhaus, the Men’s and Women’s swim teams have broken 22 school records, recorded over 100 new top ten times in school history, coached 2 Conference champions and achieved 14 All-Conference recognitions. Over the course of the last 6 seasons, 100% of Millikin swimmers have achieved lifetime best times. In addition to the success in the pool, the teams have excelled in the classroom. Millikin swimmers have achieved 25 individual Academic All-Conference honors over the past five seasons, two Jack Swartz Award winners, and the Men’s and Women’s teams have received 11 Scholar All-America Team honors. Duesterhaus was also integral in bringing women's collegiate triathlon to Millikin University and has created an elite team from scratch since the team's beginning in 2018. As a nationally ranked high school runner who was recruited to run at the NCAA Division I level and an experienced swim coach, in collaboration with Spin City Cycle in Decatur, Illinois, Duesterhaus has the elite background and resources that can continue to build the program to championship levels. Millikin Triathlon placed third in the nation in its first two years, 2018 and 2019, and moved up the podium to 2nd place when triathlon returned to racing in 2021. Prior to Millikin, Duesterhaus was the Head Swim Coach at the Spartanburg Day School in Spartanburg, South Carolina from 2008-2015. During her seven years, Duesterhaus built a program from being at the bottom of the conference to a high school powerhouse. The girls team went on to win two state runner-up finishes in 2011 and 2012 and state champions in 2013 and 2014. The boys program also won state runner-up in 2011 and claimed the state champion title in 2013 and 2014. At the Spartanburg Day School, Duesterhaus coached seven individual state champions and many All-State Team swimmers. She was named the All-Area Swim Coach of the Year four times by the Spartanburg Herald Journal. In 2014, she was selected as the SCISA Conference Swim Coach of the Year and named the SC High School Sports Report 2A Coach of the Year. Duesterhaus has over 30 years of administrative experience in higher education. Duesterhaus serves as an Adjunct Professor teaching management and organizational leadership at Millikin. Prior to coming to Millikin, Duesterhaus served as the Vice President of Student Life and Dean of Students at Converse College in Spartanburg, South Carolina. While at Converse, Duesterhaus served as Interim Director of Athletics for 11 months and assisted the school in pursing full conference membership. Duesterhaus has served as Assistant Dean of Students at Saint Michael’s College and Director of Residence Life and Residence Life Coordinator at Mary Baldwin College. Duesterhaus has worked to build collaborative partnerships with academic affairs and student services in order to best serve students and develop success initiatives. Duesterhaus earned her Bachelor of Arts degree in English from George Mason University. She received a Master of Education in Higher Education and Student Affairs Administration from the University of Vermont and earned her Doctorate in Higher Education Administration from Vanderbilt University.